What do the Triumph Street Twin, RE continental GT, or the Ducati Scrambler have in common? They all are modern bikes which have a pinch of vintage looks in them, & these kind of bikes are becoming the new favorite among the buyers in the motorcycle segment. After observing this trend and after hearing a lot from its fans, Yamaha has added a new bike in its line-up which is this, the FZ-X, at a much affordable range than the above-mentioned bikes where it does not have any direct rivals! 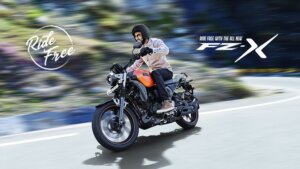 Greeting to all the readers and two-wheeler enthusiasts at MotorBhai, we hope you all are doing well, and we welcome you all to yet another article at MotorBhai. Today we would be discussing about an all-new bike, which is the latest entrant by Yamaha in the highly competitive 150cc segment, and it is none other than the FZ-X. What is it all about, what powers it, its variants, its specifications, whether is it for you or not, we will be discussing all of it today! So, without further wasting any time, let us get started!

The Yamaha FZ-X is powered by the same engine as we have previously seen on the FZ i.e., a 149cc single-cylinder fuel-injected air-cooled engine that produces a maximum power of 12.4 PS @ 7250 RPM and maximum torque of 13.3 NM @ 5500 RPM and is paired to a 5-speed manual gearbox. Underneath, the FZ-X is completely a FZ with design changes on the outside. 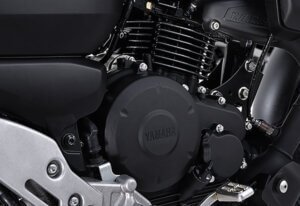 Initial pickup is impressive, and the mid-range is quick too, but the top end is quite flat, which makes it a great commuter in the city but not a great highway machine or mile muncher. Refinement is great too, as Japanese engines are known for. The clutch is on the lighter side as well.

The FZ-X’s retro look looks might not be to everyone’s taste, but one thing is for sure that is, it is indeed a head turner and will make itself notice wherever it goes. On the front, it has got bi-functional LED headlights with round DRLs which give it that vintage look thanks to the old-school design overall. Also the bike is available in three body colors which are Metallic Blue, Matt Copper, and Matt Black with body graphics and blacked-out components like the engine, fenders, and alloy wheels as well. And although the FZ-X is based on its sibling, the highly popular FZ, it shares completely different styling cues from it. 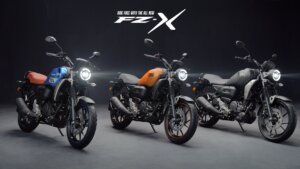 Ergonomics on the bike is quite spot-on with no major problem as such, the seating position is comfortable, and the handlebar and seating position is quite raised if we compare it to other 150cc bikes. The bike is quite light according to the weight and you will not find any issues in maneuvering the bike or while taking U-turns. Fit and finish on panels and parts is done well too. 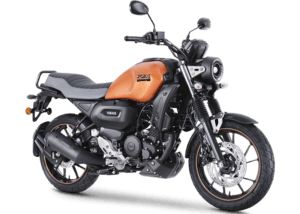 The FZ-X gets a Telescopic Fork, 41mm Inner Tube Diameter, with Fork Boot at the front and 7-Step Adjustable Monocross Suspension at the rear. The suspension we would say is 50-50 which means it cannot handle the very deep potholes due to the stiffness, but on the contrary, this stiffness will help you in high speed and gaining confidence while taking on curves. Overall, we would say the suspension has a great balance between stiffness and comfort and the bike will inspire you confidence while riding.

In terms of features, the FZ-X gets pretty much almost everything, LED Headlights & taillights, DRLs, and a neat instrumental cluster that differentiates it from the FZ and houses the digital speedometer, odometer, tripmeter, fuel gauge, clock, and the bike also has a 12 V charging point. Phone connectivity is also available via Bluetooth and the bike also gets tyre hugger. The gear shift indicator is a miss though, and this bike also misses out on kick start. 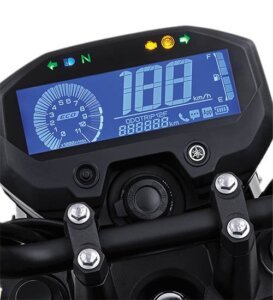 The FZ-X has two variants on offer, and the major and the only difference being in them being the availability of Bluetooth on one of the variants. The price difference between the STD, & Bluetooth variants is a mere 3k.

On the safety front, the FZ-X offers single-channel ABS and dual disc brakes both at the front and rear. It also has a side stand engine cut-off switch. The chassis is completely based on the FZ. 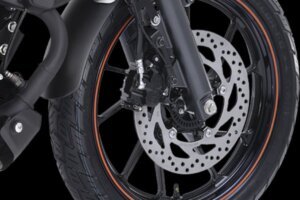 The FZ-X has two variants on offer, one is the STD and the other one being Bluetooth. The STD is priced at ₹ 1.16 and ₹ 1.19 for the Bluetooth variant. (Ex-showroom, Delhi). Considering the price, we feel the FZ-X is a bit on the higher side.

Although there are not many differences when we compare the FZ with the newly launched FZ-X mechanically, as both are based on the same platform & chassis and are even powered by the same engines, but the overall design of the two bikes is completely different from each other. Here are few of the differences among the two.

The Yamaha FZ-X is a great bike for someone who is looking out for a retro-looking commuter bike in the 150cc segment and wants to have a bike for city use which looks quite different unlike the popular bikes of this segment. The FZ-X has a decent feature list but what lets it down is its price tag, which is a bit on the higher side, and has the same engine which is present on the FZ. As this bike weighs more than the FZ, we feel Yamaha would have given it a bigger or at least re-tuned the engine for slightly more power, but there is no lag or feeling of engine being under power in the bike, it’s just that the new engine would have differentiated it from its siblings. Nonetheless, the bike is great to ride and is comfortable. Talking about the fuel economy it will return you 45 km/l easily if driven decently and that too, is quite respectable.

So, coming to the end, if you are looking for a daily commuter bike that has retro looks, is comfortable to ride which is also good on the pocket and has the trust of Yamaha and sports its Japanese tech, then you should definitely consider this bike.

Do share this article with friends if you have found it helpful, and do mention your thoughts about the FZ-X in the comments section below, Will it be a hit or a miss? Let us know! Also, if you are looking forward to buying or selling second-hand two-wheelers which are completely checked mechanically, and have history records, do not forget to check out MotorBhai for the best deals possible on the wide variety of bikes available. We would see you in yet another article soon, till then stay safe & ride safe!