What is the most popular scooter in the Indian market which comes into your mind as soon as we talk of the term “scooty”? Well yes, you thought it right. It is the Honda Activa which we think of immediately, and it would not be wrong if we call it the leader of the scooter segment as it is the highest-selling scooter in the past few decades consecutively. The popularity of the Honda Activa is such that it has become a household name, and be it children or old-age people, nobody needs an introduction to it.

Welcome to yet another article at MOTORBHAI, and we hope our readers are doing great, Today, we would be discussing about two generations of the Honda Activa (Activa 5G & Activa 6G) and would be comparing both of them to find what are the changes Honda has made to the latest generation and find out if the extra premium which we are paying for the 6th generation is justified or not. Although the Activa has remained more or less the same since its launch of the 3rd generation, but Honda has updated it due to the B-6 emission norms recently, with the launch of Activa 6G. So, without wasting any time, let us get started with the comparison! 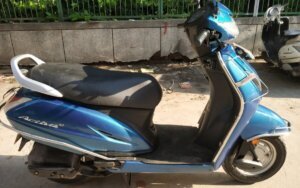 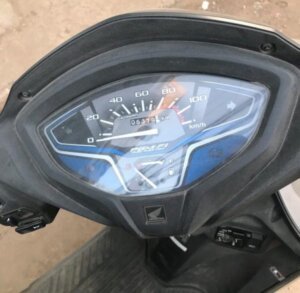 The instrument cluster is now completely an analog unit which is quite a shock because Honda used to offer a semi-digital console on the Activa 5G. There is a speedometer, odometer, and fuel level meter which is clear to read. The Activa 6G comes with an engine kill switch which is very much needed in stop-go traffic and is definitely a great feature, and this switch is also an integrated unit to the starter motor, adding to which, it has also now got a silent start feature. With the Activa 6G, Honda has also introduced the concept ESP i.e. Enhanced Smart Power which we have also seen in Activa 125, the prime function of this feature is that it decreases the friction inside the engine pistons hence resulting in better fuel efficiency, performance, and lesser combustion of the fuel. 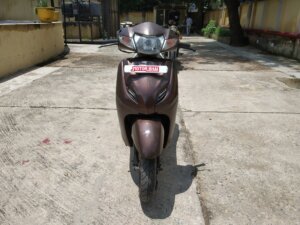 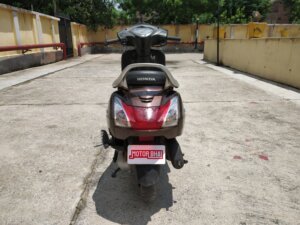 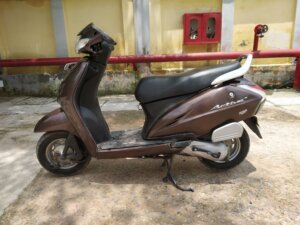 If we talk about the exteriors of the Honda Activa 6G and compare it with the 5G, it is more or less the same, but the wheelbase of Activa 6G has been increased by 22mm resulting in extra seat space, and increased leg space in the floor-board, making it more comfortable for taller riders. Another notable difference is the addition of completely LED headlamps & the increased tyre size which is 12 inches in the front and 10 inches in the rear. The body is all metal now and there is no plastic feeling now in the panels as compared to the previous-gen and feels more solid, the 6G is even narrower by 13mm than the 5G. One of the most important updates is the addition of telescopic suspension in the front which helps a lot in the ride quality as compared to the Activa 5G’s hydraulic setup. But still, the Activa doesn’t offer alloy wheels and disc brakes in its 6th generation whereas most of its rivals offer it. The addition of disc brakes would have helped in making the braking more effective.

There are some sharp creases all over its body to differentiate it as well from the Activa 5G but they very slight to notice. The side view will look identical to the previous generation but the ground clearance has been increased by 18mm making it suitable for most kinds of roads. Coming to the rear, the tail-light are slightly larger now and will remind you of the Activa 125. Also, there is the addition of an external fuel lid that can be opened from the key knob, unlike the Activa 5G where it was under the seat. 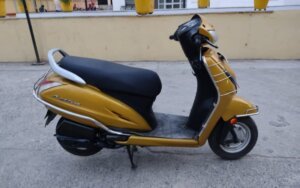 The Activa has always been one of the smoothest and easiest riding scooters in the segment, be it any generation but now thanks to its new telescopic suspension in the front, and 3 steps adjustable spring–loaded hydraulic at the rear, and increased ground clearance for our Indian roads, it has become a much better riding machine as compared to the Activa 5G and even some of its competitors. The handling is decent too. The stability is also better as compared to the last generations. But it surely feels unstable after the 70 Kmph mark. One slight problem we have with the Activa 6G which we have also mentioned earlier is its mediocre braking performance which could have been corrected by the addition of disc brakes in the front and this would made it a complete scooter and would have also made it safer. Nevertheless, we hope Honda does add it to the next generation.

So, as you can observe the Activa has become expensive by a mere ₹10,000 for each variant on offer. And we feel this price hike is indeed justified as the Activa has become better to ride and handle, has now got an even responsive engine, and has become even more fuel-efficient compared to its predecessors! Which makes it one of the best scooters available in the market today.

With this, we would like to end this comparison here. We hope we would have helped you in some way or the other with this article by letting you know the differences between the two scooters. Do let us know what your thoughts are on the Activa 6G, and what do you think Honda should add in the next generation in India’s favourite scooter in the comments section below! And also, do not forget to check out MotorBhai if you are looking forward to selling your two-wheeler or looking forward to buying a second-hand two-wheeler at the best price! You can read more pf our informative articles here.

We hope to see you soon in yet another informative blog, till then ride safe & stay safe!